Five years for office manager who embezzled $719,500 from Richland doctor

A Richland doctor said his practice was “tottering within one signature from bankruptcy” when his office manager spent $2,044 at Costco.

But any gifts she bought weren’t for her office. There was no Christmas party in December 2015 because Morris had been siphoning hundreds of thousands of dollars from the business accounts of Dr. Robert L. Whitson for her personal use.

The embezzlement was discovered a couple of months later after an internal investigation.

The amount initially was $25,050 higher, but prosecutors agreed to the reduction when defense attorney John Jensen challenged some of the charges in a restitution hearing.

Morris entered a guilty plea May 18 in Benton County Superior Court to first-degree theft, with the aggravating circumstance that it was a major economic offense.

On Thursday, she sobbed through most of the 1 1/2 -hour hearing before Judge Vic VanderSchoor.

“I would just like to apologize to Dr. Whitson,” she said. “There are no words to convey how sorry I am for the hurt, for the pain, the hardship that my actions have caused.”

I would just like to apologize to Dr. Whitson. There are no words to convey how sorry I am for the hurt, for the pain, the hardship that my actions have caused. 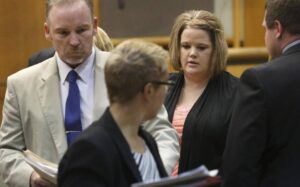 Whitson called it “black humor” when asked about that December when Morris made $15,500 in electronic transfers to her mother’s credit card and wrote $9,600 in unauthorized checks. In addition to the “office gifts” check, a second was written at the Kennewick store for $1,827.

“So is it fair to say, of those purchases made in December 2015, your business never benefited from them?” asked Deputy Prosecutor Diana Ruff.

He explained that if he ever had an employee make office purchases at Costco, he would write “not good for more than $300” next to his signature on the blank check.

Typically, a theft charge for a first-time offender carries a maximum sentence of three months in county jail.

However, Deputy Prosecutor Terry Bloor pointed out that Morris used her position of trust and a high degree of sophistication to commit multiple incidents over a long period of time. He said he told the defense all along he would recommend one month for every $10,000 stolen, and on Thursday asked for six years.

Jensen, who countered with a one-year sentence recommendation, said his client had to give up guardianship of her 14-year-old son because she will be locked up for some time. He also noted that Morris’ embezzlement was fueled by her opiate addiction, adding that she has been sober since March 2016.

“It is not an unusual story these days. A trusted employee becomes addicted for whatever reason and does whatever they do to feed that addiction, and that’s exactly what she did here,” Jensen said.

“If I was in Dr. Whitson’s position, yes, I’d want her hung high and the keys thrown away,” he added. “But I guess that’s why we don’t allow the victims to do sentencing here.”

The medical practice has about $200,000 in unpaid taxes and $50,000 in penalties, and currently is in negotiations with the Internal Revenue Service.

Jensen said he didn’t want to place fault on the family physician, but questioned how Whitson could go four years without taking appropriate steps when money was leaving his office and he knew his manager was taking opiates.

Morris went to work for the doctor in 2003 as a front-office worker at 846 Stevens Drive. She was promoted the following year when the office manager resigned, but remained an hourly employee and occasionally worked at home.

“I wanted to focus on the medical care of my patients. My goal was to provide the best medical care that I could, and that meant that I had someone that I trusted” to manage the practice, Whitson testified. He said Morris once told him, “My name is honesty.”

Whitson said Morris came into the office in 2012 with no hair, wearing a cap, claiming she was going through chemotherapy. He said the entire staff supported her and hung posters throughout the office, but eventually came to question if the cancer battle was real.

The doctor said he was helping treat Morris for pain control and had prescribed medication, but she failed to bring in copies of her outside medical records showing her cancer diagnosis, despite repeated requests.

“Obviously I erred on the side of the heart,” Whitson said, adding that he gave his bookkeeper some leeway because she was a trusted friend and he thought she was dying of cancer.

The doctor said his staff had noticed a glaring absence of payroll checks for Morris during the four-year period, and he sent her a text asking how she was covering living costs. He had an office policy that each employee had to submit a time card in order to get a paycheck.

He said Morris claimed the number of hours she was working was so minimal that Whitson was probably signing them and didn’t even notice. Actually, she was issuing her own paychecks and bonuses, according to Whitson and his staff.

Asked by Jensen if he ever looked at the books, Whitson replied: “No I did not. I depended upon people that I trusted.”

Whitson said because of the enormous financial burden created by Morris, he had to raid his daughter’s college education fund and take out another mortgage on his home. His credit rating also dropped to “the level of junk bonds,” he said.

The medical practice has about $200,000 in unpaid taxes and $50,000 in penalties, and currently is in negotiations with the Internal Revenue Service.

“It’s just amazing how much traction you can get when you do not have a hole in the bottom of your business account,” he said.

It is believed that Morris used the money to buy jewelry and purses, take numerous trips and pay for dog boarding and cellphone services.

Nothing is configured Source: Five years for office manager who embezzled $719,500 from Richland doctor | Tri-City Herald

Front Desk Manager was stealing Frequent Flyer Miles
How to stay sane when your dental office computers are down.
My practice is “gone”! Planning for disaster.
Increasing your practice’s business insurance